Need to upgrade your app to 6.1?
We can help with our productized consulting service.

If you are interested in Ruby and Rails performance, you have definitely read articles by Nate Berkopec from Speedshop. At Ombu Labs we are big fans of his work, his Complete Guide to Rails Performance book and Slack community.

When Nate announced a series of public workshops I didn't hesitate and signed up as quickly as possible. Here are my notes from my experience at the workshop on October 17th.

The workshop mentioned a lot of the concepts outlined in his book. The 80/20 rule is a good guiding principle for doing performance optimization.

80% of the work performed in an application will come from 20% of the code. This is a good rule to prioritize performance optimizations: "Applying optimization/attention equally to every line of code is a waste of time when only 20% of the code causes 80% of the problems" 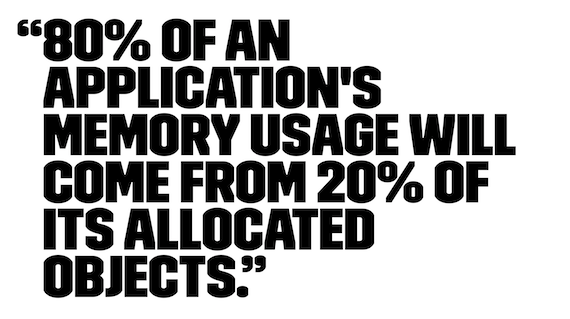 After the part about prioritizing the performance optimization work, there was a quick intro to the ideas of benchmarking and profiling.

One of the best things about this workshop was that it wasn't just theory, for every topic there was a practical part to apply what you learned. For this section, we used wrk to benchmark our applications.

Then you can run a benchmark for one of your pages:

For testing purposes I used one of our products (Ombu Shop) and its production environment. I don't recommend that you do that: It could cause problems in your production environment and network latency could be high at the moment of your test (which would report something inaccurate just because your Internet connection had a hiccup)

I would suggest using your local environment and making sure to run it using RAILS_ENV=production.

Considering benchmarks don't usually follow a normal distribution you should always look at the Max and +/- Stdev values.

Nate's advice is to use production-like data. If you have little data in your database, you might end up with great results that are just not realistic. You should import a realistic data dump before running your benchmark.

Little's Law: How many servers do I need?

In this section there was some very interesting data about products that were running Rails at some point in time: Twitter; Shopify; and Envato.

You can calculate the ideal amount of servers using this formula:

This makes sense because load is variable and you are using average metrics to calculate the ideal amount of servers.

This section was a good refresher about different benchmarking tools in Ruby. benchmark is a good starting point and present in the standard library, but if you want to take it one step further, you can use benchmark-ips which provides metrics about iterations per second. An extension of that gem is benchmark-ipsa which shows information about the memory allocations of the code you are benchmarking.

One word of caution is to not let microbenchmarks drive every decision you make: Sometimes you feel the urge to search and replace Ruby idioms in order to apply a blanket solution. You must be careful with that, sometimes the context of a request is different than that of another request. So sometimes a Ruby idiom is faster within one context but not another one.

After the lunch break, we heard a good explanation about the different types of profiling: statistical vs. tracing.

Tracing profilers have high overhead, but their precision is perfect. An example of such a profiler is ruby-prof.

One word of caution is to take into account that profiling isn't free. It will slow down your application a little bit. It is important to only use one profiler at a time.

After profiling our applications and finding slow endpoints, we learned about memory allocation and garbage collection in Ruby. We played around with ObjectSpace which is a good way to see how many objects are in memory at any point in time.

You can do this in your Rails application like this:

Some libraries that were mentioned in this section:

The rack-mini-profiler gem should be in everybody's tool belt. It gracefully integrates with other Ruby gems like these:

Once you have installed it, you can run this command to setup its configuration:

After you restart your application, you will be able to see a new section in the upper left corner of every page:

You can start clicking around to find more information about the execution of the request. If you add ?pp=profile-memory to any request, it will show you the allocations grouped by gem. This feature depends on the memory_profiler gem. 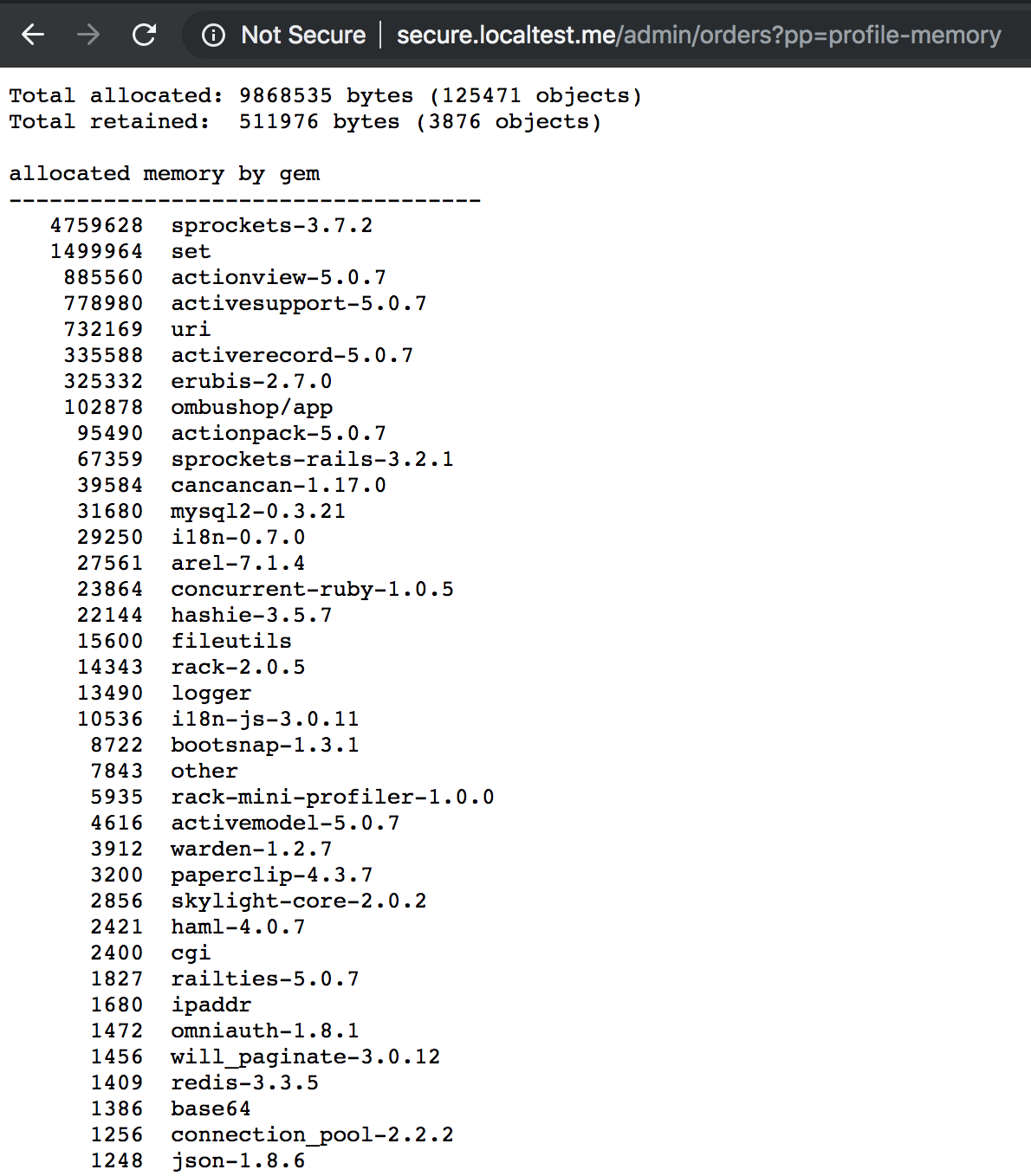 If you want to see a CPU flame graph (What is a flame graph?), you can add ?pp=flamegraph to find the hottest code paths.

Adding ?pp=flamegraph to the path will output something like this: 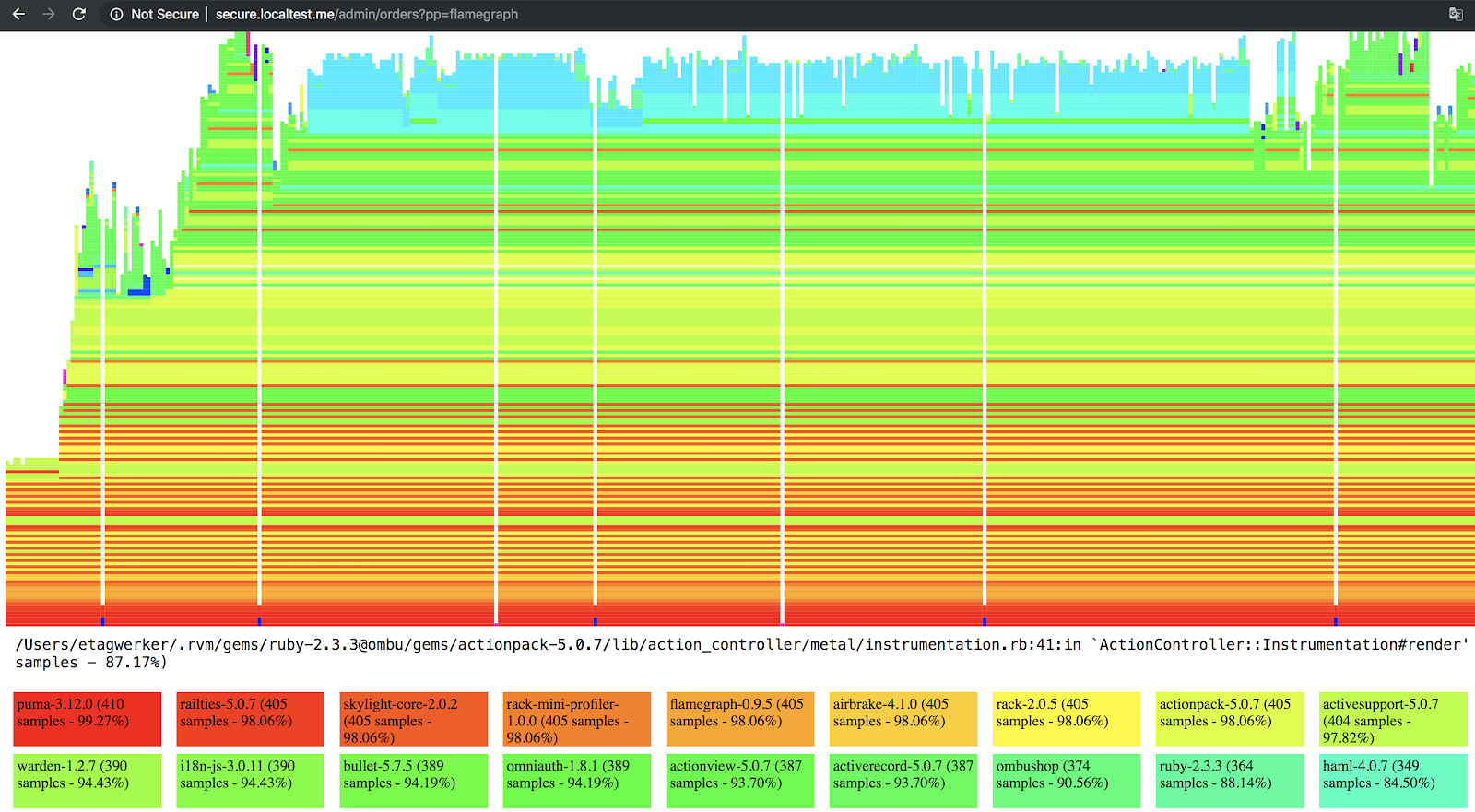 You can poke around to find the code paths that are most processor-intensive. From my experience, it can get complicated to find your own application code within that huge graph. You will need to zoom in to find some poorly performant application code.

If you have a hard time interpreting the data in the flame graph, try reading Sam Saffron's approach to dealing with information overload.

I could probably write a lot more about this super useful gem, but maybe that deserves a new article. If you want to explore further, you can add ?pp=help to any request and see some documentation.

One thing to keep in mind is to make sure to use production-like data to profile your application. You can get some unrealistic results if you don't use enough data. Also, run the profile multiple times to make sure that you see many samples, not just one or two. There may be some outliers if you only run it twice.

I enjoyed the exercise of profiling a slow controller action and trying to speed it up.

After profiling a slow controller, Nate showed us a few sections in the Chrome Dev Tools that are quite useful for finding problems with slow web pages.

Also, here are are some great charts that will give you a good rule of thumb for determining whether your page is slow, average, or fast!

A great tip is to throttle your own Internet connection to something like Slow 3G to see your application when your connection is not super fast (most of us develop using broadband connection). You can do this over here:

This technique combined with Chrome's performance profiling can show you some problems with the way your page loads. I detected an issue when loading the spreadsheets in Ombu Shop's homepage.

We made the mistake of loading our spreadsheet near the end of the page, not near the beginning (before the JavaScript assets are loaded) so for a split second our page looks like plain text without any style in it.

There is a lot of value in the content, applying the concepts on a real project, and learning from Nate's experience. What I valued the most was the constant Q&A (every section had room for questions).

If you have the chance to attend Nate's workshop, you shouldn't hesitate. I can't recommend it highly enough!